So, at about 5am Sarah had been taken into hospital to have some stitches put in by a surgeon. At about 10am I had to leave as we had an Ocado (weekly food shop) delivery on its way for 11am. So, after getting home with Sarah’s father and feeding Obi we sat down for a cup of tea. It was probably the most we have ever talked in one go. We are very different people and the fact we were both now father and grandfather was a great talking point. Both excited, both completely shattered.

Once the delivery arrived Sarah’s dad went back to the hospital to stay with Sarah until they had finished doing whatever it was hospitals do (little did we know that Sarah would not be leaving until after 10:30pm that day). So, I put the shopping away and started cleaning up the cups and dishes that had been left around. Then for the first time since getting home, I went upstairs…

Now, this will only really matter if you have had a home birth. If not, then you won’t have to deal with any mess at all, apart from poo (But that is something I will talk about next time). If you are having a home birth gents, understand that midwives and the like do not clear up your home for you. So you need to be prepared mentally that you going to see your Wife or partners faeces (not always, it didn’t happen to my wife) and quite a lot of blood, blood clots and placenta (a picture of our sons placenta has been added to the birth story blog if you want to see one).

…I was greeted with a smell of cold iron before I had even taken a step into the bathroom or bedroom. Sarah had lost roughly half a litre of blood during delivery of both oak and placenta. 500ml might not sound like much but if you were to take a 500ml bottle of water and tip it onto the floor, you would quickly see that it is a substantial (but not dangerous) amount of blood to lose.

Inside the bedroom, the tarp was still down on the floor with towels and medical towels (imagine very absorbent sanitary towels the size of a dish towel). On the bed was also towels and medical ones. All had a large quantity of blood on them. Most things got put into a bin liner and our home towels got put into a wash bag ready to see if they can be salvaged in the washing machine.

The birthing pool needed emptying so I started filling up the one ten litre bucket I had (we had two but the other was used by Sarah during labour when she couldn’t get to the loo…I’ll leave that to your imagination). At the fill line the birthing pool had roughly 600 litres of water so you can imagine, with a 10-litre bucket, filling, walking to the bath to empty, took a substantial amount of time when you are trying to be careful not to spill any. I think it took roughly two hours, maybe a little less. I was shattered at that point and went downstairs to made a cup of tea and finished the washing up.

Upstairs I pulled up the tarp after cleaning it up with a towel and rolled it up and took it downstairs. I then went to the toilet to take a piss. What I was greeted with when putting up the toilet seat was nothing short of a massacre (or a bloodbath, both are equally accurate). Sarah had given birth to the placenta over the toilet so anything else evacuated her body with it so it was a considerable amount of…..mess. So I got to work with my Eco cleaners! Toilet, beeday (however you spell it), sink and bath. None were spared the wrath of the Ecover spray!

After I finished cleaning, I took a trip to the pub across the square for a cheeky pint. Within a few minutes half the square knew Oak had been born, so drinks all round!

I went back home and tried to get some sleep before Sarah came home however I had reached that point were sleep would not come. Sarah’s dad text me to let me know that they still did not know when they would be out of the hospital and this was perhaps 5pm.

I cooked myself some beans and chips and started watching fellowship of the ring. I finished my food and went upstairs to finish tidying up the bedroom and went back over to the pub for a glass of port. By 9pm I was getting a little worried but Sarah’s dad let me know that they should be back by 10. Then that got pushed back until 10:30pm. Nearly 17 hours after her stitches where finished, Sarah walked through the door with Oak and her parents.

Sarah went upstairs to wash and I held Oak. He was so small and quiet. He had his eyes open and although I knew he could not see anything but a blur, I knew the contrasts of the cream walls and black beams were drawing his gaze. I made some tea for Sarah and me while her mother bathed her. Sarah’s father sat on the stairs due to feeling a little faint for not eating during the day or drinking that much so they left once Sarah was in bed.

I showered and got into bed with Sarah and Oak. He was staring at her, listening to her voice. Sarah had a little cry of happiness. His head was so small! Everything was small! We made a human and here he was. 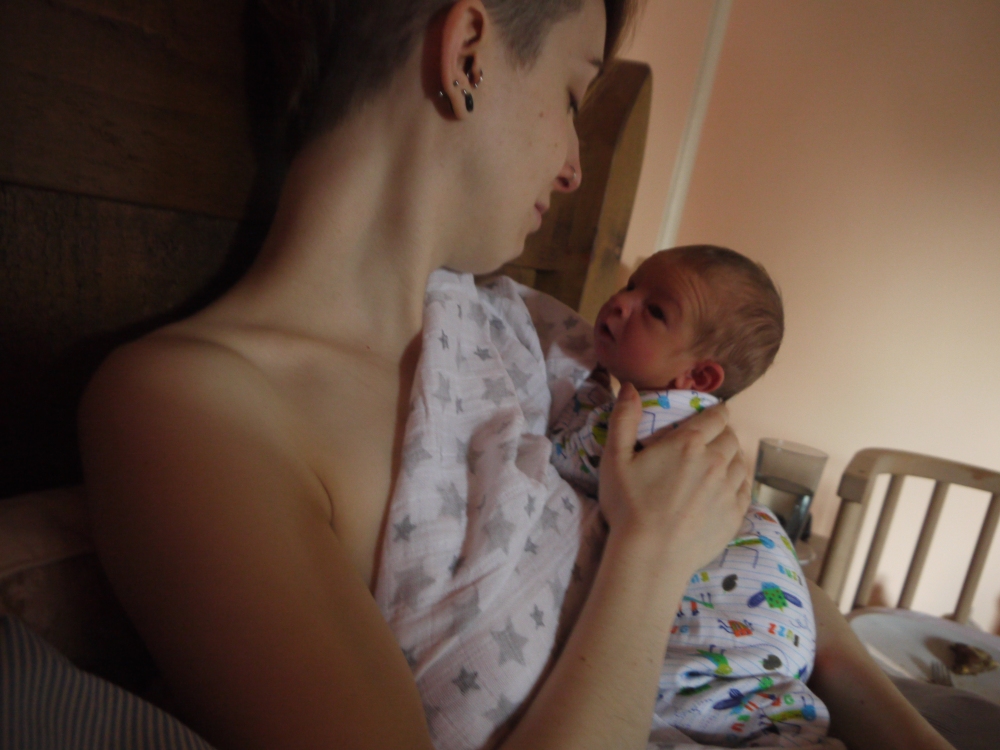 He fed a little. And for the first time in forty-eight hours I got some sleep.

An hour later I woke up and Sarah was still awake. So, I spent the next few hours rocking him to sleep so Sarah could get some rest. That was pretty much the first week in a nut shell, in the first seven days of Oaks life I worked out that I got roughly twelve hours sleep. But overall, Oak was a quite a peaceful baby who just wants to be held. He didn’t cry very much and before the first week was out, he had taken a trip to the pub!